​DEMO-SHOP
Orders will not be processed and shipped.
Cookie preferences
This website uses cookies, which are necessary for the technical operation of the website and are always set. Other cookies, which increase the comfort when using this website, are used for direct advertising or to facilitate interaction with other websites and social networks, are only set with your consent.
Configuration
Technically required
These cookies are necessary for the basic functions of the shop.
"Allow all cookies" cookie
"Decline all cookies" cookie
CSRF token
Cookie preferences
Currency change
Customer-specific caching
Individual prices
PayPal payments
Selected shop
Session
Comfort functions
These cookies are used to make the shopping experience even more appealing, for example for the recognition of the visitor.
Note
Statistics & Tracking
Affiliate program
Track device being used
Categories

An absolute premium espresso from Ancona. The beans are roasted gently and individually according to the respective roasting profile in the drum roaster. Thanks to its outstanding quality, the Shamal Espresso Blend is even Espresso Italiano certified. Discover the unique espresso coffees from Caffè Di Giampaolo. Read more ↓ 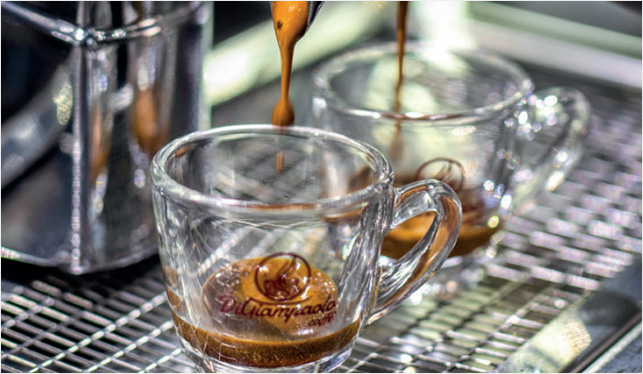 "Do not go where the road takes you, but go where there is no road and leave a trace."
With this quote from American philosopher Ralph Waldo Emerson, Di Giampaolo Caffè has lived and grown since its inception.

The path of this top Italian roaster has led through research experiments, innovative roasting technologies to sophisticated flavor variations. Always driven by a burning passion for espresso coffee and its perfection.

But let's start where it all began. In 1987, Maurizio Di Giampaolo decided to start a company in his hometown of Ancona, on the east coast of Italy. Like probably all Italians, Maurizio loved espresso. So he started roasting his first own beans and kept testing new varieties and blending ratios. Friends and acquaintances were quickly infected by Maurizio's passion for roasting and followed his plan. Over the years, he gathered a top team of experts around him. Together they worked daily on new recipes and blends, which they sold in the surrounding area. Since then, the company has become deeply rooted and well-known in the region.

Word quickly spread about the exceptional quality of the coffee and the special relationship with customers, and Di Giampaolo's espresso quickly became known internationally. Especially in the HoReCa industry (hotel/restaurant/catering) his products enjoyed great popularity.

Over time, Maurizio's company has made many more technological developments to continuously improve the quality of its products. And the products also received a new look. The new branding reflected the corporate image of the now well-known "Di Giampaolo Caffè" brand. Marketing campaigns and merchandising followed to make the brand even better known internationally. However, the always high quality of the products was never allowed to suffer, the Maurizios was and is the highest premise of the founder. Di Giampaolo was finally rewarded with the most prestigious of all espresso awards: The "Espresso Italiano" quality certificate from the I.N.E.I (Italian Espresso Institute).

For Maurizio Di Giampaolo, a dream had come true. He wanted to put a smile on people's faces with his espresso. Now he not only delights thousands of espresso lovers with his creations, but is officially one of the few certified coffee roasters dedicated to the original quality characteristics for a typical Italian espresso.

It has been a long and often arduous journey, but one that has more than paid off in the end. "Don't go where the road takes them, go where there is no road and leave a trail." That pretty aptly describes Di Giampaolo Caffè's career. Nowadays, it's hard to imagine the world of a discerning Coffee lovers without them.

A journey can describe the technical and productive path of a company; as well as be a portrait for a special sensory journey in coffee enjoyment. You will be taken on an expedition from the origins of the raw beans to the finest flavors of the finished espresso. During a genuine master roast, you will taste the journey of the bean, from its cultivation in the tropical highland forests of Brazil to the last golden-brown drop from the portafilter.

Di Giampaolo Caffè has made this principle of the aromatic journey its corporate philosophy. The brand's packaging design features recurring topography symbols. On the bags, one sees a drawn map representing heights, depths, and distances. A metaphor for the evolution of the roastery and the long journey it has taken. Always with the aim of achieving the best possible taste.

It is also meant to be a small incentive to imitate- Take your destiny in your own hands and pursue your goals tenaciously. A life lesson that Maurizio would like to pass on to all people.

To support their geographical concept, Di Giampaolo chose well-known winds, mostly found in the Mediterranean, to name his blends. Adapted to the meteorological characteristics of the winds, the varieties are also, such as the Libeccio, strong and warm-aromatic or the Scirocco rather mild and balanced.

Thus, Di Giampaolo Caffè has not only developed a unique and original concept for itself, but has also created espresso varieties that will be remembered both by taste and by name.

Viewed
This website uses cookies, which are necessary for the technical operation of the website and are always set. Other cookies, which increase the usability of this website, serve for direct advertising or simplify interaction with other websites and social networks, will only be used with your consent.
Decline Accept all Configure